It was 40 years ago this week that the 1976-77 T.C. Williams basketball team capped one of the great seasons in Northern Virginia basketball history.

The Titans (28-0), ranked No. 1 in both the Washington Star and Washington Post high school basketball polls, finished off an undefeated season wit
h a 95-63 rout of William Fleming of Roanoke in the Virginia Class AA final at University Hall in Charlottesville
Fleming was no match for the Titans, who rang up 28 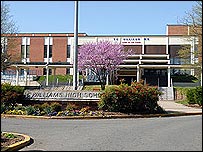 points in both the second and third quarters of the game to pull away. Playing the baseline-to-baseline, up-tempo style that had made them so successful during the regular season, that T.C. Williams team set state tournament records for single-game scoring (95 points) and its two-game total (261) as well.

Of course, high-scoring games were nothing new for that squad. T.C. Williams averaged 84.2 points per game that season, allowing just 62.3 per game. Coach Mike Hynson’s team rebounded and ran, pressed ballhandlers and converted opponents’ miscues into points – often at a dizzying pace.

“They are truly awesome,” marveled Langley coach Sonny Chisolm at one point late in the regular season. “It doesn’t make any difference was you do; they do their job better.”

In the championship game rout, 5-foot-5 dynamo Willie Jackson led the way. He scored 26 points and made a half-dozen steals to key the victory. Frank Holloway added 20 points and 13 rebounds, picking up the slack for 6-foot-5 center Anthony Young, who sat out for a spell after suffering a calf injury in the second quarter. Guard Craig Harris, who earned first-team All-Met honors that season, contributed 19 points against William Fleming – exactly his average for the season.

The victory came as a huge relief in and around Alexandria. No city team had won a state title since 1945, when the since-closed George Washington squad (GW was one of the schools closed and consolidated to form T.C. Williams) brought home the big prize for head coach Rasty Doran.

T.C. Williams had suffered through some near-misses in previous years, including a couple of stinging losses to West Springfield in the region playoffs and a 64-48 loss at Halifax in the state semifinals two years before.

The weight of all that may have affected T.C. Williams once the postseason began. T.C. Williams was always one of those places where a coach could count on having a lot of talent at his disposal. He could also count on high expectations – and no shortage of folks in the community with opinions on how the team should be run.

All of that my have played a role in the Titans’ rocky road through the Northern Region playoffs that year. After blitzing teams all season, T.C. Williams had a couple of close calls that could have very nearly ruined their perfect season.

A dunk by Anthony Young with two seconds left was the Titans’ only basket of the second half. The referees’ lone job for most of the game was picking up the paper airplanes that restless fans sailed onto the court.

Woodson coach Red Jenkins had watched T.C. Williams handle his team easily in three previous matchups that season, winning by 26 points one time and by 15 on two other occasions. So, Jenkins decided to hold the ball – and it nearly worked.

“It was a perfect gameplan and the kids executed it as well as anyone could ask,” Jenkins said afterward.

In the state semifinals, the Titans had to endure another nail-biter. A couple of late free throws made the difference in a 64-61 over Henrico that put them in the title game.

T.C Williams shot just 40 percent for the game and committed 13 turnovers, but found a way to persevere.

Young was the key in the semifinal win, collecting 12 points, 23 rebounds and six blocked shots. Holloway led the scoring with 18 points.

“We are all feeling some pressure, but we’re just going to have to play the best we can,” Harris said after the semifinal victory.

It would be difficult to imagine the Titans playing any better in the final. Their shooting began to click and they could once again play free and easy, rolling to an easy victory for the title.

“We knew it was just a matter of time,” said Hynson, “and tonight they let it all loose.”

One thought on “Forty years ago, TC Williams wrote the perfect ending”